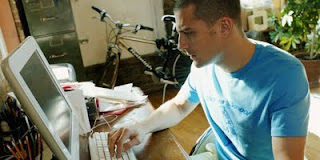 I was on the New York Post and up pops an ad claiming to be some from fake Los Angeles Tribune about some fake guy named Mike Richardson written by some fake reporter called Tom Chilton -- claiming this fake, non-existent Mike Richardson makes $5,000 to $7,000 per month working less than 10 hours per week.

(Here's the URL they are working under now, called http://www.losangeles-tribunes.com/finance/.)

MySearchProfitsOnline.com and MySearchCashOffer.com Steals at Least $50 or $100 Per Month from Customers...

...those who don't dig past the lies of only $1.87 to download some fake report that probably doesn't tell them a thing anyway, and find the terms and conditions and searches thru all the crap for dollar signs and finds out:

"The monthly membership fee of $40 plus the monthly maintenance fee of $9.95 that I am authorizing will be automatically drafted monthly from my Credit/Debit Card or Checking Account..."My Search Cash" on my statement...

After 7 days, a $49.95 recurring monthly fee for My Search Cash membership will be billed to the credit card..."

So I don't know if those scamsters are charging people $49.95 or double that each month -- but I've heard they make it hard to cancel once they get those credit card numbers from unsuspecting people who just want to make money online.

Yes, You Can Make Money Online...

But most likely not from those scammers.

Now you see where they get the money to run those profitable ads all over the net -- but I don't see why Google won't stop them. Guess the money is too green...

Anyway, making money online is hard work and takes time and energy (a lot more than 10 hours per week) -- I spend at least 40 hours per week or more working online running different websites, and I'm praying my Google Adsense income will at least hit $1,500 this month.

I've made $5,000 from Google online in the past -- but that was before my site got banned, and let me tell you, it took the hours of a full-time day job and then some.

So don't fall for the scams. It takes hard work, prayer, and you can find out how to make money with Google Adsense or Amazon Affiliates or programs like that for basically free -- but you've got to invest the time to search around and read what real webmasters like me (and Darren Rowse at ProBlogger.com) have written about in our archives to do it.

Not the get-rich-quick-kind-of-way. Because the only ones making money thru those schemes are the scammers stealing people's credit card numbers thru deception. May God bring them down soon.

Neck Pain Orange County said…
Some of these guys are ruthless with their scams. But i don't understand how people still fall for these tricks even though thousands have already been through the same thing and have warned them of it. Some people are just stupid i guess...
Wednesday, July 29, 2009 9:19:00 AM

Neck Pain Orange County said…
Some of these scams are so obnious its not funny. I mean the fact that these people still fall for it is just unbelievable!
Wednesday, July 29, 2009 9:19:00 AM

I Love Paula said…
You would think with the economy as bad as it people would wise up and for that matter would not have any extra money to give the scammers in the first place.
Friday, July 31, 2009 1:08:00 AM

Bahaus furniture said…
WHy are people still falling for those kind of scams? I guess they should really really be careful in what they are entering before they jump into it.
Thursday, November 12, 2009 4:24:00 AM

Popular posts from this blog

May 08, 2007
Update: For those who continue to enjoy this post, check out my website about 50 real online people making more than $50k per year, and my page where I update my online salary.

UPDATE: Before you read any further or especially link to this old list, please check out "Paula's New List of Blogger Salaries (and Webmasters, Affiliate Marketers, Content Scrapers, Domainers and any other title you can think of) June 2007" by clicking here! ~ Thanks, PAULA NEAL MOONEY

One of my favorite features in Parade magazine is the issue where they grab a random sampling of people and report their incomes -- from the millionaires to the working poor.

Since I'm fascinated with how much money bloggers and webmasters are making nowadays, I've created a similar list -- a random sampling of people making money on the net.

Who's on Paula's List of Blogger and Webmaster Salaries?
I spent hours and hours scouring the internet for the last-reported information ab…
172 comments
Read more

August 04, 2009
UPDATE - I can't do it. Just as soon as I signed up with Tissa's people search engine, I cancelled. I just don't feel right about helping people find other people's addresses and phone numbers. AND THIS PRIVACY ISSUE IS GAINING STEAM. CHECK OUT THE CONTROVERSY BREWING OVER THE MYLIFE.COM PRIVACY SELLING ISSUES THAT TISSA USES TO PROVIDE THE PEOPLE SEARCH ENGINE INFO. I know I could probably make money with it, but it's just not sitting right with my soul. Back to the drawing board. I know better things await...

I kept trying to rationalize that many people could use the people search engines for good purposes, like reconnecting with old classmates and finding deadbeat dads and such -- but the reality is that if just one person uses them for nefarious purposes, I just don't want to be a part of that.

I wonder if Tissa would care if people found out the address of his fabulous home, and came a' knocking on his door?

June 19, 2007
FIND OUT HOW MUCH BLOGGERS REALLY MAKE ONLINE -- CHECK OUT THIS NEW WEBSITE ABOUT MONEY-MAKING ONLINE CALLED 50 OVER $50K...
by Paula Neal Mooney

The time has come.

The time is now.

Paula N. Mooney will you please publish that list now?!

It's bigger and better than ever before with more pics, and double the amount of bloggers, webmasters, domainers, affiliate marketers (or a smidgen of some or all of those titles) and their reported incomes.

How Much Do You Make?
Money is funny.

The abundance of it, the lack of it, the subject of cash in general gets attention.

While some invoke their choice not to post their online income nor discuss it at all, I've always been of the Suze Orman mindset ever since I read her first book.