, a book-turned-movie about two Washington Post reporters whose investigative journalism exposed what later turned into the Watergate scandal that forced President Nixon's resignation.

It all started innocently enough, with the reporters covering what was initially thought to be a robbery at the Democratic Party National headquarters. We all know how that ended...if only some sleuth would get to the bottom of that Chappaquiddick incident... 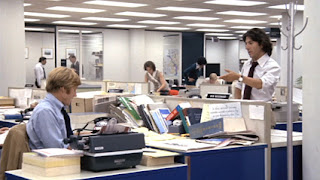 Anyway...my plight started just as innocently a couple of month ago, when I tried to submit a post to Digg.com and got an error message. Upon Googling the error message, I turned up not only other legitimate users who've also been banned by Digg, but plenty of accusations that Digg -- who prides itself on allowing average citizens to control their front page news -- and other organizations have paid people to Digg certain stories to the front page.

So, I did what bloggers do, I blogged about it. See I Was Banned from Digg.com for the dirty details. In that post, I told people to quickly Digg my Orble blog post about being banned. Soon thereafter, that Orble URL was banned from Digg too. Uh oh...I must've pissed off the nerdtrons, I thought. Again, I did what any techie would do and figured out ways to Digg my pieces from other locations.

I pretty much forgot about the issue till I saw my Digg-banning plight listed in the post called And the List of Domains Ditched by Digg Keeps Growing. Today I decided to write a news report about it, and digging around the blogosphere turned up some pretty unfavorable stuff about Digg.com, ironically, a site that I love to troll for upcoming interesting stories. Here's just a sampling of what Digg.com detractors have found about banning and Digg payola:

* The Hypocrisy of Digg and Spam
* How to Be a Dirty Digger
* Digg is Killing Itself with Domain Banning
* Legalizing the Underground Digg Economy
* Open Letter to Kevin Rose
* Top Digg Users Taking PR Payola?
* Digg Corrupted: Editor's Playground, not User-Driven Website

It's funny that my news report about the melee called Digg Bans Legitimate URLs and Draws Fire from the Blogosphere has already been reported by the Digg Army as possibly containing inaccurate content. It also trips me out that some Digg commenters summarily dismiss all the banned URLs as "containing no content" before they've had time to absorb any of them or write witty comebacks like "that blog sucks anyway" and such.

But I am hoping and praying the best for Kevin Rose and Digg.com and Revision 3. If Digg.com returns to its original purpose of letting the public in general decide which stories should be popular -- without techie tricks and under-the-table payments -- it will be around for years and years to come. After all, Digg.com developers obviously have the techie know-how to make this happen. They just need to implement it honestly and forthrightly...

Bookmark http://www.paulamooney.blogspot.com/ to see where this Digg banning story ends..

ilker said…
I think Digg is overly hyped. Once everyone realize that it is in control of the leet few, they will start looking for substitutes. I think Netscape.com is a good one but the design needs to be more simple to achieve the success equivalent to Digg.

Digitalnomad said…
I agree with Ilker Paula. Who cares about Digg. You probably would have mote notoriety from being banned.

Popular posts from this blog

May 08, 2007
Update: For those who continue to enjoy this post, check out my website about 50 real online people making more than $50k per year, and my page where I update my online salary.

UPDATE: Before you read any further or especially link to this old list, please check out "Paula's New List of Blogger Salaries (and Webmasters, Affiliate Marketers, Content Scrapers, Domainers and any other title you can think of) June 2007" by clicking here! ~ Thanks, PAULA NEAL MOONEY

One of my favorite features in Parade magazine is the issue where they grab a random sampling of people and report their incomes -- from the millionaires to the working poor.

Since I'm fascinated with how much money bloggers and webmasters are making nowadays, I've created a similar list -- a random sampling of people making money on the net.

Who's on Paula's List of Blogger and Webmaster Salaries?
I spent hours and hours scouring the internet for the last-reported information ab…
172 comments
Read more

August 04, 2009
UPDATE - I can't do it. Just as soon as I signed up with Tissa's people search engine, I cancelled. I just don't feel right about helping people find other people's addresses and phone numbers. AND THIS PRIVACY ISSUE IS GAINING STEAM. CHECK OUT THE CONTROVERSY BREWING OVER THE MYLIFE.COM PRIVACY SELLING ISSUES THAT TISSA USES TO PROVIDE THE PEOPLE SEARCH ENGINE INFO. I know I could probably make money with it, but it's just not sitting right with my soul. Back to the drawing board. I know better things await...

I kept trying to rationalize that many people could use the people search engines for good purposes, like reconnecting with old classmates and finding deadbeat dads and such -- but the reality is that if just one person uses them for nefarious purposes, I just don't want to be a part of that.

I wonder if Tissa would care if people found out the address of his fabulous home, and came a' knocking on his door?

June 19, 2007
FIND OUT HOW MUCH BLOGGERS REALLY MAKE ONLINE -- CHECK OUT THIS NEW WEBSITE ABOUT MONEY-MAKING ONLINE CALLED 50 OVER $50K...
by Paula Neal Mooney

The time has come.

The time is now.

Paula N. Mooney will you please publish that list now?!

It's bigger and better than ever before with more pics, and double the amount of bloggers, webmasters, domainers, affiliate marketers (or a smidgen of some or all of those titles) and their reported incomes.

How Much Do You Make?
Money is funny.

The abundance of it, the lack of it, the subject of cash in general gets attention.

While some invoke their choice not to post their online income nor discuss it at all, I've always been of the Suze Orman mindset ever since I read her first book.